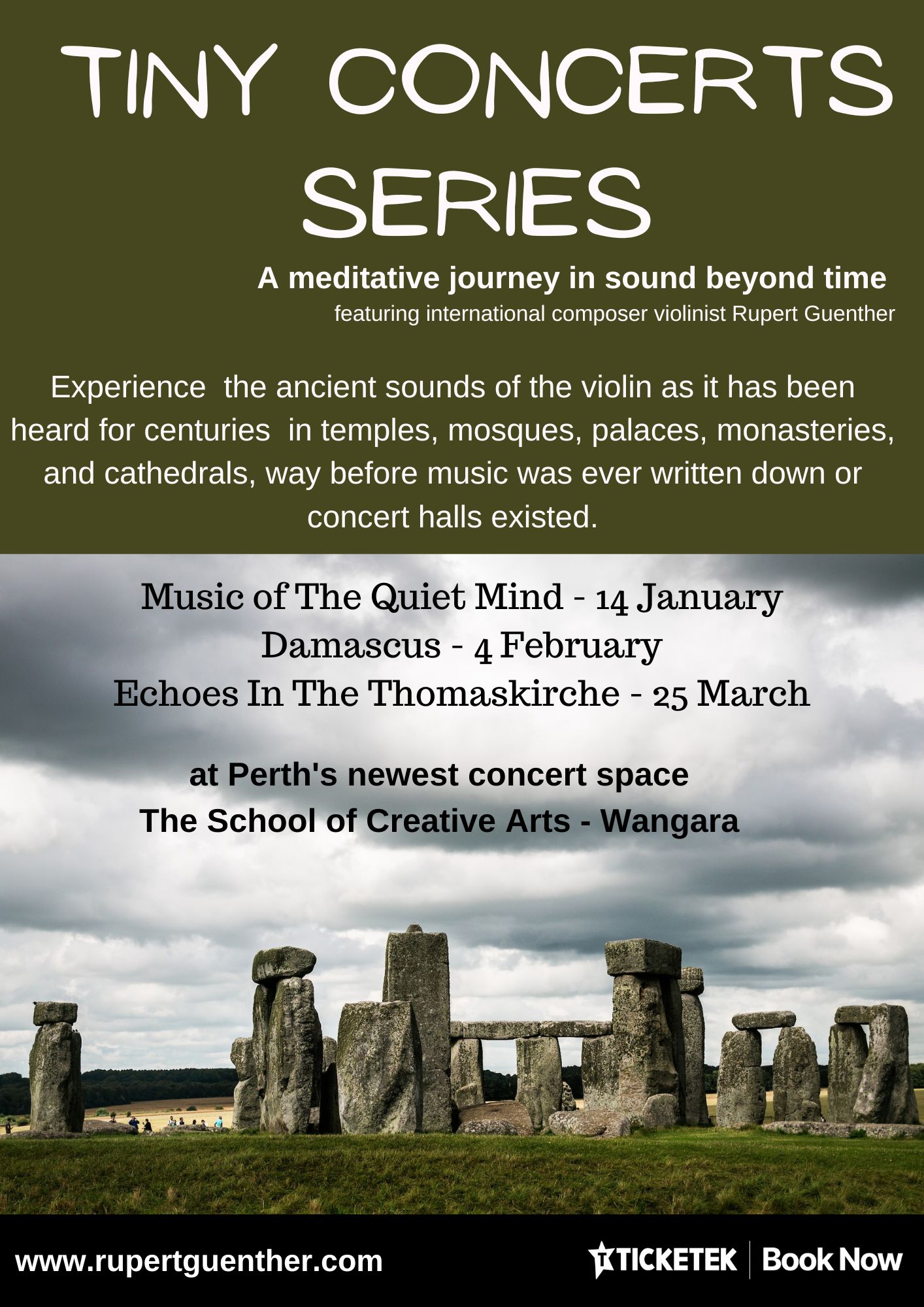 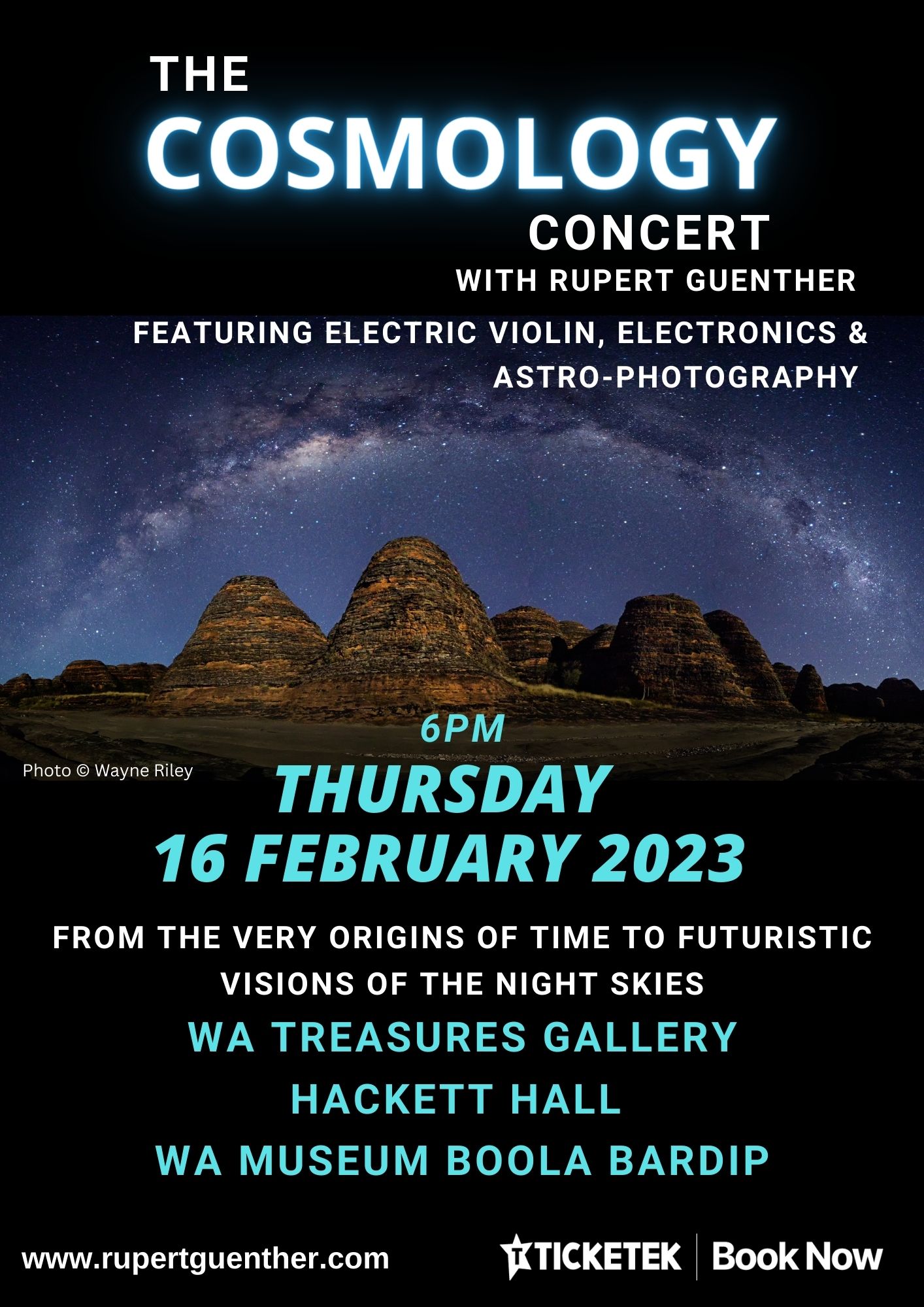 The sounds of the violin have been heard in the temples, mosques, palaces, monasteries and cathedrals of many civilisations, way before music was ever written down or concert halls existed. The Tiny Concerts Series weaves both the earthly and ethereal world-music sounds and influences of old Europe, the Middle East, North Africa and Asia, in the way of the troubadours and minstrels over thousands of years - meditative musical journeys which reach beyond time and space in the mystical language of sound and light, resonating the highest humanitarian ideals from the ancient world and into the far-off constellations of the future.

International composer violinist Rupert Guenther’s imaginative playing and diversity of style deeply captures ‘spirit of place’ through his music. It has seen him give hundreds of recitals in Australia, the UK, USA and Europe including Tate Britain (London), The Guildhall Festival (London), Melbourne International Festival, and Bombora House New York (USA). He has released 27 albums as an original solo artist since 2003 including five CDs commissioned and recorded for ABC Classic FM. Trained as a concert violinist in Vienna, Austria, his deep spirituality has fuelled his musical passions since a young age. His versatility has seen him work as sideman to the stars with many artists and orchestras including the Vienna Chamber Opera, the Australian Pops Orchestra, Beatles’ producer Sir George Martin, Olivia-Newton John, Demis Roussos, John Farnham and Hollywood singer-songwriter Lisbeth Scott.

International composer-violinist Rupert Guenther takes us on an epic journey in space and time, to discover that we are not here on earth looking up, with all these stars and galaxies “out there” above us - rather that we and our planet and solar system are just shining specks in deep space just as all the other star systems are. We are ourselves “out there”, and are very much a part of “out there”. Using electric violin and live electronic looping, Rupert Guenther turns the violin into a astonishing vehicle for his art, evoking through sound and music an extraordinary picture of the cosmos and our momentary place in it, from the very origins of time to futuristic visions of the night skies.

Featuring as a live music performance with a large screen experience of beautiful astro-photography images of the constellations and their relationship to the Earth, taken by some of the world’s best astro-photographers.

Rupert is a international composer-violinist who has played concerts of his own music and soundscapes for over 20 years including Tate Britain London, Docklands Museum London, National Gallery of Victoria Melbourne, Lawrence Wilson Gallery UWA, Guildhall Festival London aand recitals in Sweden, Austria, Italy and USA. Trained as a virtuoso concert violinist in Vienna, Austria, his deep feeling for music, the natural environment and the cosmos has fueled his musical passions over a diverse range of musical styles since a young age. Formerly a member of the Vienna Chamber Opera, he has been sideman to the stars such as Beatles’ producer Sir George Martin, Olivia-Newton John, Demis Roussos, John Farnham, Anthony Warlow, and Hollywood singer-songwriter Lisbeth Scott.
Tickets on sale now